A question that routinely comes up in social media circles is what is the value of a Facebook fan? (The question also applies to the value of a Twitter follower, Youtube subscriber, email recipient, etc.)

Invariably, whenever the question is asked, some mathematical savant – typically a self-professed digital alchemist – produces a proprietary algorithm that has somehow arrived at answer along the lines of $1.07 (Source: WSJ) or $3.60 (source: Vitrue) or even $136.38 (source: Syncapse), and so begins the race to answer this now quasi-hallowed question of the new digital age. The lure: He who can convince companies that he can calculate the value of a Facebook fan might have a shot at selling them on the notion that fan the more fans they acquire, the more value they generate for their business. (You can imagine the appeal of answering the “what is the ROI” question by explaining to a company that 10,000 net new fans per month x $136.38 = a $1,363,800 value. At a mere $75,000 per month, that’s a bargain, right?

All that is fine and good, except for one thing: Assigning an arbitrary (one might say “cookie-cutter”) value to Facebook fans in general, averaged out over the ENTIRE breadth of the business spectrum, is complete and utter BS.

To illustrate why that is, I give you the 5 basic rules of calculating the value of a Facebook fan:

Rule #1: A Facebook fan’s value is not the same as the cost of that fan’s acquisition.

Many of my friends in the agency world still cling, for example, to the notion that estimated media value or EAV (estimated advertising value), somehow transmutes the cost of reaching x potential customers into the value of these potential customers once reached. Following a media equivalency philosophy, it can be deduced that if the cost of reaching 1,000,000 people is generally $x and you only paid $y, the “value” of your campaign is still $x.

A hypothetical social media agency-client discussion regarding EAV: “Using social media, we generated 1,000,000 impressions that we converted into followers last quarter. At $1.03 per impression/acquired fan, the total cost of the campaign was $1,030,000. The average cost of an impression through traditional media being $3.97, the estimated media value of your campaign was $3,970,000.”

So you see what has happened here: Through a common little industry sleight of hand, a cost A vs. cost B comparison has magically produced an arbitrary “value” for something that actually has no tangible value yet. In case you were particularly observant, you may also have noticed how easily some of the authors of the posts I linked to in the intro mixed up costand value. Ooops. So much for expert analysis.

A word about why cost and value cannot be substituted for one another when applied to fans, followers and customers: Cost may be intimately connected to value when you are buying the family car, but the same logic does not apply to customers as a) you don’t really buy them outright, b) they don’t depreciate the way a car does, and c) they tend to generate revenue over time, far in excess (you hope) of what it cost to earn their business.

Even with the cost of acquiring a fan now determined, why has the value of that fan not yet been ascertained? Rule #2 will answer that question.

Illustrated, the value of a fan can be calculated thus:

– Cost of acquiring Rick Spazzyfoot as a Facebook fan: €4.08

– Amount Rick Spazzyfoot has spent on our products and services since becoming a fan five months ago: €879.52

Which of the above two € figures represents the value of that fan to the company?

b)     Indirect value: If a fan seems to be influencing other people in his or her network to become transacting customers (or increase their buy rate or yield), then you can factor that value in as well for those specific time-frames. Because measurement tools are not yet sophisticated enough to a) properly measure influence and b) accurately tie it to specific transactions, I wouldn’t agonize over this point a whole lot. As long as you understand the value of word-of-mouth, positive recommendations and the relative influence that community members exert on each other, you will hold some valuable insights into your business ecosystem. Don’t lose sleep trying to calculate them just yet. Too soon.

The point being this: Until a Facebook ‘fan’ has transacted with you (or influenced a transaction), the monetary value of that fan is precisely zero. 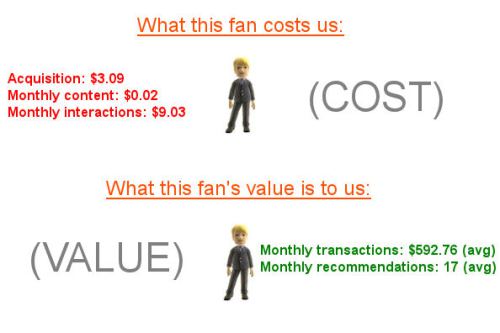 One could even say that if each fan cost you, say, an average of $1.03 to acquire, the value of a fan before he or she has been converted into a transacting customer is actually -$1.03.

1. The lifestyles, needs, tastes, budgets, purchasing habits, cultural differences, online engagement patterns and degree of emotional investment in your brand of each ‘fan’ may be completely different. These, compounded, lead to a wide range of behaviors in your fans. These behaviors dictate their value to you as a company.

3. Lastly, we come to the final type of Facebook fan: The one that doesn’t fall into the transacting customer category.  They might remain “fans” without ever converting into customers. Do you know what percentage of your fans right now falls into this non-transacting category? Do you really think that their value is $3.97 or $139.73 or whatever amount an agency, guru or consulting firm arbitrarily assigned to them? No. They clicked a button and left. Their value, until proven otherwise, is zero.

With this kind of fan/customer diversity within your company ecosystem, you come to realize that arbitrary values like “the value of a Facebook fan is $x” can’t be applied to the real world.

Rule #4: A Facebook fan’s value is likely to be elastic.

Because the value of a Facebook fan is a result of specific purchasing habits (and impact on others’ purchasing habits), a fan’s value is likely to be elastic over time. If you aren’t familiar with the term, it simply means “flexible.” As in: the value of a Facebook fan will change. It will fluctuate. It will not always be the same from measurement period to measurement period.

Because transaction behaviors change, the value of a fan is also likely to change.

You can average this out over time (the fan’s value might average out to $97/month over the course of a year, for example), or just total her value per month, quarter, or year, depending on your reporting requirements. That is entirely up to you.

Note: In order to figure this stuff out, you are going to have to either get creative with the way your CRM solution interacts with your Facebook analytics suite or wait until Social CRM solutions get a little more robust. Some are getting close.

Examples of exceptions (where fan value may be somewhat inelastic):

– You are a bank and a fan’s only transaction with you is a fixed monthly payment.

– You are a cable company and a fan’s only transaction with you is a monthly cable bill.

– You are a publisher and a fan’s only transaction with you is an annual magazine subscription.

– Your fans don’t transact with you. They clicked a button and left. If their value was $0 a month ago, it is still $0 this month.

If your business charges for a monthly service that tends to not fluctuate a whole lot, chances are that the value of each of your fans will remain rather constant. This compared to a Starbucks, a Target or an H&M.

Rule #5: A Facebook fan’s value varies from brand to brand and from product to product.

If a fan/customer’s value can fluctuate from month to month and that value can vary wildly from individual to individual within the same brand or product umbrella, imagine how much it can vary from brand to brand, and from product to product.

Compare, for example, the average value of a fan/customer for Coca Colaand the average value of a fan/customer for BMW. (Hypothetically of course, since I don’t have access to either company’s sales or CRM data.) What you may find is that a fan’s annual value for Coca Cola might average,say, $1,620 per year, while a fan’s annual value for BMW might average $42,000. Why? Because the products are entirely different. One costs less than $3 per unit and requires no maintenance. The other can cost tens of thousands of dollars per unit and requires maintenance, repairs, not to mention the occasional upgrade.

You can see how the notion that the “value” of a Facebook fan can be calculated absent the context of purchasing habits, brand affiliations, fluctuations in buying power, market forces and shifts in interests and even value perceptions is bunk. Unless of course you find yourself being asked to transform cost into value. (Less work. Easier to sell.) But that is a completely different conversation.

I hope this helped. From now on, if anyone seems confused about the topic of fan/follower/subscriber “value,” point them to this post.

(Now translated into a bunch of languages including German, Korean, Japanese and Spanish.)

Reboot Your Social Media Program: From Likes to ROI – Part 4

Stop calling it the “Sharing Economy.” That isn’t what it is.