Why I didn’t immediately write a follow-up to Social Media ROI.
For Immediate Release: FIR#749 – Podcast

Facebook Levers, Social Business, And The Fate Of Earned Media

Facebook’s decision to start charging brand pages for eyeballs should not have come as a shock to anyone. The only thing that surprises me about it is how long it took for Zuck and his team to finally pull that lever. I have read a lot of articles and blog posts bemoaning Facebook’s decision and heard a lot of hoohah about greed and “rat traps” and Machiavellian schemes, but there’s a piece of this puzzle that many pissed off pundits either don’t know about or choose not to see, and it’s this:

If you don’t know what I am talking about, read this Valleywag piece from Sam Biddle. If you aren’t in the mood, here is the most critical tidbit:

“A source professionally familiar with Facebook’s marketing strategy, who requested to remain anonymous, tells Valleywag that the social network is “in the process of” slashing “organic page reach” down to 1 or 2 percent. This would affect “all brands”—meaning an advertising giant like Nike, which has spent a great deal of internet effort collecting over 16 million Facebook likes, would only be able to affect of around a 160,000 of them when it pushes out a post. Companies like Gawker, too, rely on gratis Facebook propagation for a huge amount of their audience. Companies on Facebook will have to pay or be pointless.”

Also, there’s this piece by Tara Urso in Social Media Today. Again, the main vein of it:

Your Facebook page’s organic reach is about to plummet — even more so than it has in the past six months, down to a lowly 1-2%, actually. That means if you have 1,000 Facebook likes on your page, only about 10-20 of those fans will even see your posts! While organic reach has long been declining, it has significantly declined since the fall of 2013.

And finally, some stats to back it all up, courtesy of AdAge and Social@Ogilvy: 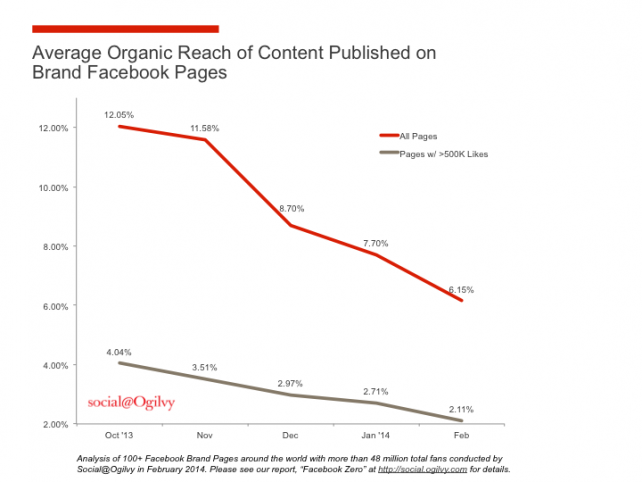 Shift Communications put together a handy calculator that helps you estimate (or at least get an idea of) what Facebook’s paid promoted posts might cost you. Click here to check it out. (Hat tip to Christopher Penn and Scott Monty.)

I won’t speculate about whether or not this was Facebook’s plan all along. (Maybe it was, maybe it wasn’t. It doesn’t really matter now.) What I do know is that it makes sense. Not just from a pure revenue generation standpoint but from a moral standpoint as well:

Imagine that you are Facebook in 2008. You have created a massive media ecosystem where people can talk to each other, share news, pictures, stories, blog posts, etc. What an idea, right? “Engagement” becomes the name of the game. Communities start growing around ideas, topics, even products and brands. At first, the ones with the most true, organic engagement are the fastest to grow and gain traction. What a cool concept. As more and more people start to spend time on the platform and your targeting engine gets better, advertising becomes a solid revenue model. So far so good.

But then brands start getting lazy. Instead of interacting with their fans (oops, sorry… “likes,”) they start handing off their Facebook pages to digital agencies. “Content is king” starts to replace actual engagement. The exercise becomes this: have your agency craft content for Facebook, publish it, measure likes and click-throughs, repeat. Before long, those branded Facebook pages stop being about engagement and conversations. They just become a push-only marketing channel. That brings us to 2014.

Like I said before, if you treat earned media like paid media long enough, you will teach it to act like paid media. Brands and their agencies did exactly that. Looking at it from a media buyer’s angle, it was a lot like having your own free dedicated page in a huge digital magazine with a billion subscribers. Brands paid agencies to produce “social content” (advertising that looks like Facebook updates) but the media space was free. How long did anyone expect that to last? We can’t blame Facebook for meeting brands and their agencies the rest of the way.

If you’re a big brand, this won’t have any impact whatsoever on their “Facebook Marketing” strategy. Okay, sure, it will cost a little more now. So what? Not a big deal. Cost of doing business. Small businesses though? Very different story. This move could be catastrophic for a lot of small and medium-sized businesses that had spent the last few years building (earning) communities on Facebook, and that needs to be addressed. Not just that, but the new reach model is also screwing up user experience on Facebook to the point where what they want to see in their feed is being throttled back. So while Facebook’s reaction is normal and perfectly rational, it is causing two unintended problems we need to address: preserving small business organic reach, and giving users more control over their Facebook experience (not just privacy settings).

Here are two simple suggestions that could help right the scales a little:

1. Give users some kind of dashboard that gives them more control over what appears in their feed, especially in regards to the people they follow. A lot of what users want to see in their feed is currently hidden by Facebook, and a pretty big chunk of what does appear in their feed is hours (and sometimes days) old. Give users a way of customizing their feeds. You can still inject it with sponsored content, Zuck. Just let us manage the rest of it ourselves.

2. Give users the ability to opt in to continue seeing content from brand pages they want to stay engaged with. For instance, I’m a fan of Carolina Triathlon, O-Cha Tea Bar, and Imperial Black. All three are relatively small businesses. They aren’t major advertisers with hundreds of millions of dollars of advertising money to throw at digital channels every year. I want to see their updates in my feed though. I am an active part of their community and they are active parts of mine. (That was the idea when I clicked that Like button in the first place.) Give me the ability to see their content. It matters to me and they’ve earned that attention.

I understand that these two options might seem at odds with Facebook’s new paid media model, but hear me out: think of this as a means to reward good community management behavior while still monetizing on purely by-proxy advertising behavior. Business and brand pages that only (or mostly) just broadcast can still pay for the reach, for those sponsored and promoted posts. But business and brand pages that make the effort to respond and mingle with fans, especially if they aren’t massive companies like McDonald’s or Pepsi, can catch a break. Set some parameters. Set some thresholds. Don’t treat a local restaurant that does its own community management on social channels the way you treat a global brand that has five digital agencies posting crap content twice a day like some kind of social channel robot. It wouldn’t be very difficult to make that work. Give small businesses a break, at least. Let their true fans opt in to their content again. It will make the ecosystem work a lot better and everyone still gets what they want.

Footnote (3/28/14) – As an added consideration, here is an astute observation made yesterday by Jillian Paige Jackson during a discussion about this: “This move has sort of rendered page likes obsolete, in that if you’re paying for views now no matter what, then you don’t need to depend on having your fan base there to propagate your posts organically.” That’s right. In an ecosystem were likes (being a fan, “opting in” to a feed) no longer has any real impact on reach, what is the value of a “like” on Facebook, moving forward? Zero. At best, it’s an endorsement. Does this signal the end of the “like” as a relevant social media metric (and for far too many businesses, the key Facebook metric)? Based on what we are seeing with the impending end of organic reach for business/brand pages, yes. Unless Facebook does something about it, acquiring “likes” is about to become as futile an exercise as giving away koozies at a trade show.

The CMO And The Cloud – Part 3