A cool little piece from Alice Truong on FastCompany.com caught my eye yesterday. Here’s a link. The central point was that Facebook numbers point to a little bit of unexpected weakness along a few specific growth curves.

The first, which is several months old, dealt with teenagers abandoning Facebook. (Where are they going? Instagram, Vine, Snapchat, Kik, Askfm and Twitter top the list, according to this piece by abc news.)  A recent study published by iStrategy Labs (via Business Insider) gives us a little more details on what this teen exodus looks like:

The significance of 3 million teens “leaving” Facebook (or rather spending more time on other platforms) has been a little overblown (no, Facebook is not going the way of MySpace just yet) but it is the type of shift that is worth keeping an eye on.

The second little red flag in recent Facebook statistics comes to us from the folks behind the Adobe Digital Index and deal with YoY deltas in revenue per visit. Per FastCo‘s Alice Truong and Tamara Gaffney of Adobe Digital Index:

‘Facebook still refers the most traffic to retail sites, but its growth for revenue per visit was the slowest, up 72% to $1.22 from the year prior. Meanwhile, the other major networks all gained in revenue per visit: Tumblr by 340% to $1.10, Pinterest by 244% to $0.93, and Twitter by 131% to $0.83. “What we discovered really shocked us,” Gaffney said. “The biggest growth year over year came from Tumblr.”‘

That’s right: though Facebook is still the category leader in terms of referral volume and net RPV yield, Tumblr, Pinterest and Twitter are starting to catch up. Why? More interesting content, richer experiences, less salesy noise, more pleasant interactions with other users and brands, and much more pleasing design. This is particularly significant for retailers and advertisers looking to a) reach younger customers and b) find social channels that are less cluttered than Facebook, offer more visibility for their products, and allow for a richer brand experience for their audience.

Boutique and lifestyle brands are already finding that Pinterest, Instagram and Tumblr are ideal social platforms to generate awareness for their wares via drool-inducing photography instead of boring old messaging.

Okay, enough with the eye candy. You get the point. (We’ll revisit Instagram, Tumblr and Pinterest later.) For now, here are some graphs that illustrate ADI’s findings for you: 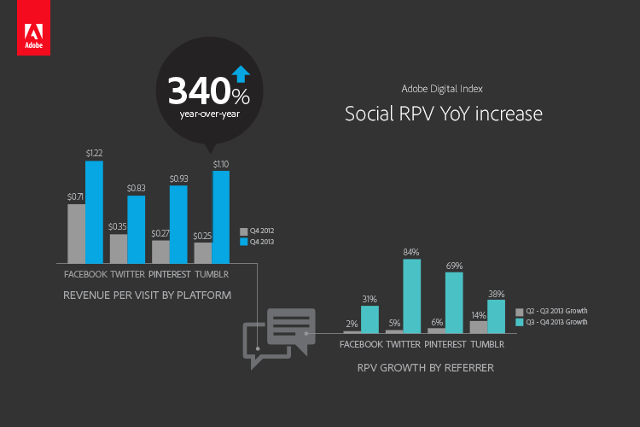 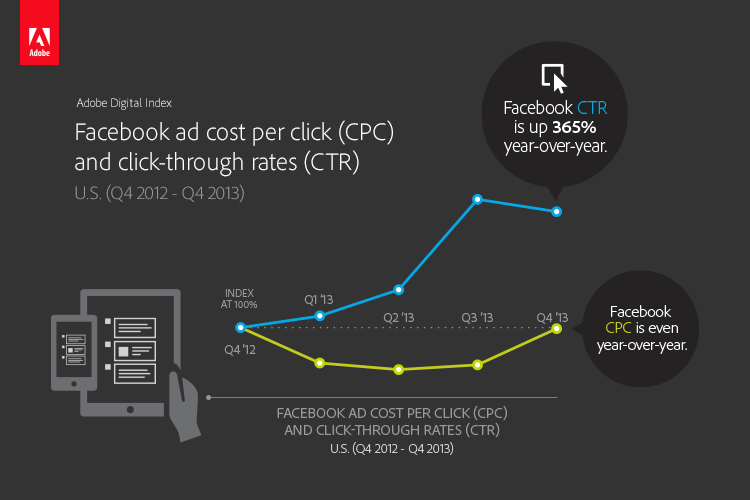 So… not exactly the great demise that linkbait headlines suggest, but worth noting nonetheless. (For more stats on where Facebook stands in the social audience wars, check out WeAreSocial’s 2014 Global Digital Statistics.)

If you or your agency have been focusing exclusively on Facebook updates, Facebook advertising and tweets to generate site traffic and drive transactions, the next few months may be a good time to start re-evaluating your channel and content strategies. There’s a lot more to be done out there and you’ve really only scratched the surface.

The CMO and the Cloud, Part 7: the #CloudTalk interview

Deathbed Confessions – Part 2: You Are Not Your Job

“Quantified Self,” fads, and shark-jumping.