IBM Just Made Cognitive Computing And Advanced Analytics Accessible To Everyone.
The cloud, agriculture, and the rest of us: some valuable lessons

A little insight into the state of organic reach on Facebook

Last week, I noticed that the links I was posting to my Facebook wall were getting significantly less play than the posts I was sharing from Facebook. For instance, if I shared a post from, say, Mashable, the likes, comments and shares were pretty solid. But when I posted a link to page that wasn’t already being shared by a ton of people, all I was getting was… crickets. Given the state of organic reach on Facebook, (you can read more about it here and here) and my understanding of what types of content publishing Facebook is trying to monetize vs. the way it looks at simple status updates, I dreamed up a quick and easy little experiment to see the extent to which Facebook was throttling down updates (unpaid) linking to original content compared to identical updates with no links to original content. 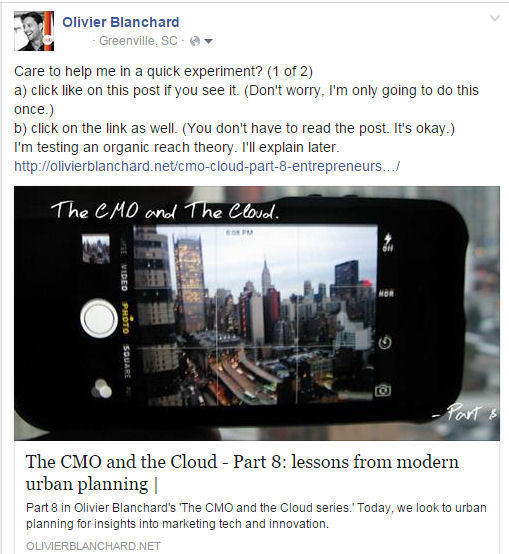 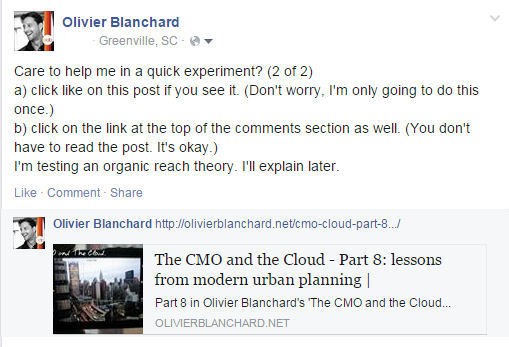 I posted both updates within a minute of each other to make sure that the audience size would be the same for both updates, and checked back on them after 30 minutes, then every hour for 5 hours.

The question I had was this: would both updates show up in people’s feeds, and if so, would they be equally visible?

Here is what I found: 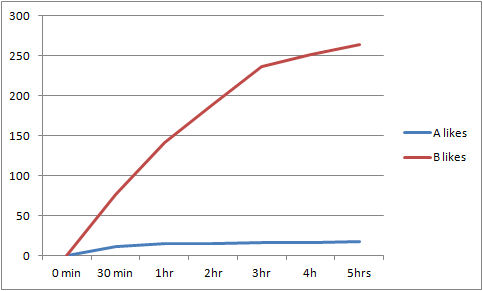 (The comment count in A (1 of 2) should actually be zero since, by their own admission, the 2 comments posted were a side-effect of the B update, so the 44x might actually be 89x.) 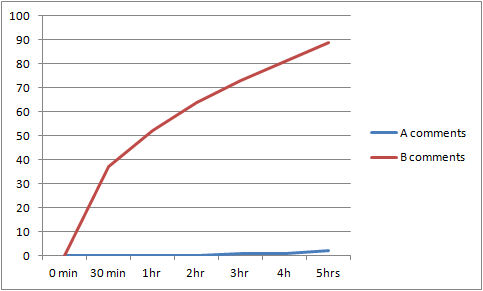 Now… let’s not get ahead of ourselves. This isn’t a “case study” by any stretch of the imagination. For starters, it was a quick little test that produced nothing more than anecdotal data. It’s barely a data biopsy and it isn’t really statistically relevant on its own. Second, other factors might be at play here. For instance, reversing the order in which the updates were posted might have affected the results. (I invite you to test that theory if you want and share your data.) Third, the test only looks at 5 hours. The visibility of both posts could change over time. This is definitely not a study about content lifecycles. Fourth, as Charles Lau astutely pointed out, my own comments in response to reader comments might have also contributed to improving update B’s visibility. (Engagement driving more engagement, and so on. There probably is a cumulative effect at play as well.)

Having said all of that, the difference between interactions for updates A and B is so significant (and consistent with my original observations) that there appears to be something going on with how Facebook decides what type of free content your audience gets to see.

What does it all mean?

1. Organic reach on Facebook isn’t actually dead. BUT… both the type of content shared on Facebook and the manner in which that content is shared, have a massive effect on how many people in your community will see it.

2. Facebook does seem to be manipulating the distribution/visibility of your content based on how it is shared and where it comes from, and I don’t think it has much to do with editorial quality or topic relevance. (Remember that the copy was identical in both updates. The only difference was that one contained a link and the other didn’t.) So the intent here doesn’t seem to have anything to do with connecting an audience with content that most appeals to them (which would actually be pretty cool, if only to move the signal to noise ratio in the right direction). It seems to have more to do with content monetization. Again, Facebook’s shift away from earned media and towards paid media isn’t exactly new.

Admittedly, there could be something else going on, but I just don’t see what it could be. Unless someone has a better theory, it seems that Facebook’s message here might be this: “If you want to use this platform to help you get eyeballs on your content, even eyeballs you have earned, you need to pay for it now.”

Think about that next time someone asks you about ‘earned media.’ Things are a little more complicated than they were in 2011, when I wrote Social Media ROI. (The principles in the book are as true today as they were when I wrote it, and that isn’t going to change anytime soon, but Facebook is far less of an earned media platform today than it once was, and it is important to be aware of that.)

For what it’s worth, I hope this little test will give you some insight into where the content you are posting on Facebook is and isn’t going, and why.

(And now, to figure out ways around this that don’t necessarily involve chucking coinage into Zuck’s fancy toll basket…)

PS: Sorry to be the bearer of bad news. I just thought you should know.