First look at ‘The Peacemakers’ – a WWI adventure novel
“Quantified Self,” fads, and shark-jumping.

Today in the US is Martin Luther King Jr. Day. Whether you choose to make it a day of reflection, a workday like any other or just a day off, take a few minutes to consider the man, his legacy, his wisdom and his sacrifice. He isn’t just a name and a footnote in history. He was a man with a family and dreams and hopes of his own. And if it hadn’t been for an assassin’s bullet, he might still be alive today. (He would be in his mid-eighties.)

It boggles the mind that he was only 39 when he was killed. Not even 40.

Below are a few lessons from the Rev. Martin Luther King Jr. that you don’t usually get to hear. It can be applied to life, work, and pretty much whatever you want. Letting a good man’s insights influence more than one aspect of your life isn’t a bad way to honor him. I hope you’ll find a use for a lot of these in the next 12 months:

Whatever your life’s work is, do it well. A man should do his job so well that the living, the dead, and the unborn could do it no better.

Rarely do we find men who willingly engage in hard, solid thinking. There is an almost universal quest for easy answers and half-baked solutions. Nothing pains some people more than having to think.

Every man must decide whether he will walk in the light of creative altruism or in the darkness of destructive selfishness.

A genuine leader is not a searcher for consensus but a molder of consensus.

The time is always right to do what is right.

All labor that uplifts humanity has dignity and importance and should be undertaken with painstaking excellence.

The art of acceptance is the art of making someone who has just done you a small favor wish that he might have done you a greater one.

Whatever affects one directly, affects all indirectly. I can never be what I ought to be until you are what you ought to be. This is the interrelated structure of reality.

Almost always, the creative dedicated minority has made the world better.

Many people fear nothing more terribly than to take a position which stands out sharply and clearly from the prevailing opinion. The tendency of most is to adopt a view that is so ambiguous that it will include everything and so popular that it will include everybody. Not a few men who cherish lofty and noble ideals hide them under a bushel for fear of being called different.

The nation and the world are in dire need of creative extremists.

We must use time creatively.

A nation or civilization that continues to produce soft-minded men purchases its own spiritual death on the installment plan.

Nothing in all the world is more dangerous than sincere ignorance and conscientious stupidity.

Faith is taking the first step even when you don’t see the whole staircase.

Life’s most persistent and urgent question is, ‘What are you doing for others?’

The function of education is to teach one to think intensively and to think critically. Intelligence plus character – that is the goal of true education.

Human salvation lies in the hands of the creatively maladjusted. 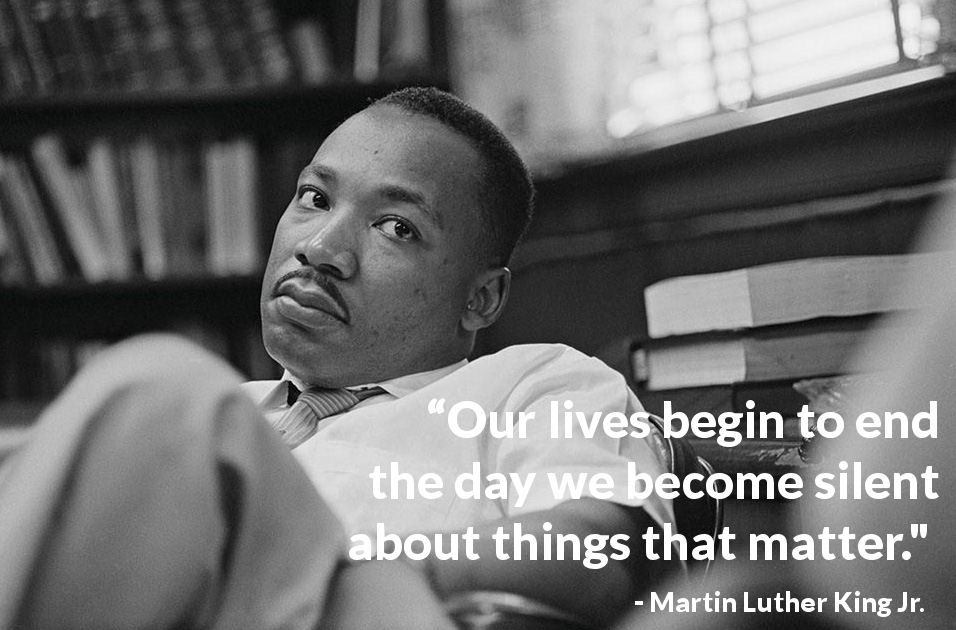 How Toxic Leadership May Be Killing Your Business (And Your Career)