Sneak Peek – The Nemesis Engines, Vol.2: Steel & Bone
Influencers: to pay or not to pay?

Next week, we get back to talking about business and whatnot. I promise. But since it’s the weekend and all, and the weather probably sucks if you happen to be in the northern hemisphere, and my watch says it’s pretty much book o’clock already, I thought I would treat fans of The Nemesis Engines with a little bit of eye-candy.

I know, I know… I have a book to finish and you probably want to read it sometime before the oceans start to rise. I should be hurrying the fuck up instead of digging through Whitehall’s archives and Harbert Pencroft’s diaries and scrapbooks for photos, but how else am I supposed to get the details right? It isn’t like I’m making all this up, you know. Besides, I have to give my typing fingers a break every once in a while. (All six of them. Don’t laugh. I never took typing in high school.)

The hard part is doing this without leaving flaming bags of spoilers on your respective front steps, but… you know… it’s all a whole lot more fun when the pics have hidden little details in them or drop hints or give you a little sneak peek into what’s coming. It’s especially tricky since some of you have already read The Peacemakers but some of you haven’t. I don’t want to give too much away if I can help it. Some things are better discovered all on your own, book in hand.

Having said that, here’s a picture of the Lady Sargasso. The back of the pic only says 1916 on it, but based on what we know of the ship’s coming and goings, this photo was probably taken from the control gondola of the Osprey during its approach (see The Peacemakers). If you have read it already, you’ve probably noticed some of the ship’s unique features. That’s all I have to say about that. (It’s okay to squeal with delight and whatnot. I won’t judge.) 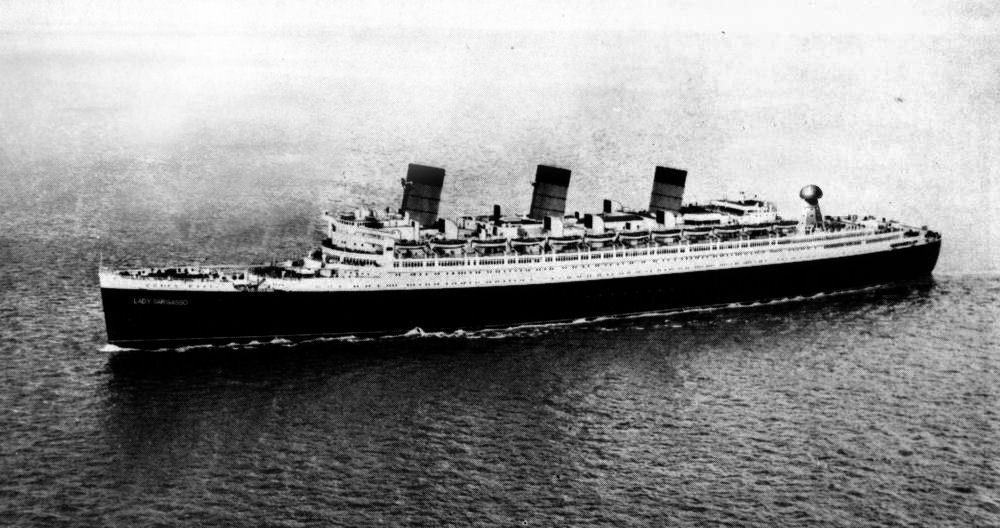 And what have we here? (Below.) That, I can’t tell you, though it isn’t exactly rocket science. Some hints were dropped in The Peacemakers, and I have made no secret about the fact that the story will move to the battlefields of Europe in Steel & Bone, so you can fill in some of the blanks already. Just be aware that there’s a lot of action coming, and that it gets pretty intense in every conceivable way, and when HBO or Stars or Netflix decides to turn this into a series, it will blow. you. away. 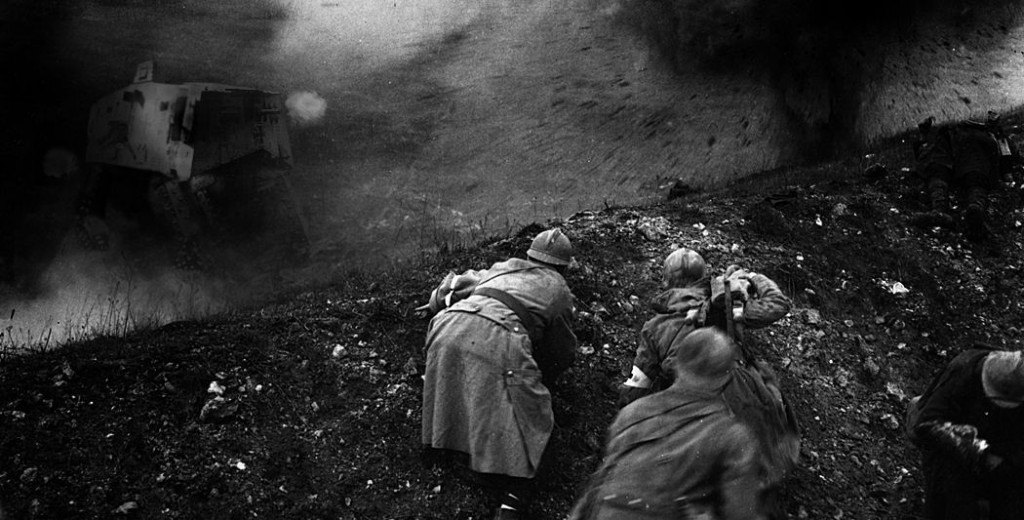 I’ve also made promotional versions of those images in case you feel like slapping them on a Pinterest board or putting them on Instagram or Tumblr or whatever. Expect more like these, and hopefully even screen savers at some point. 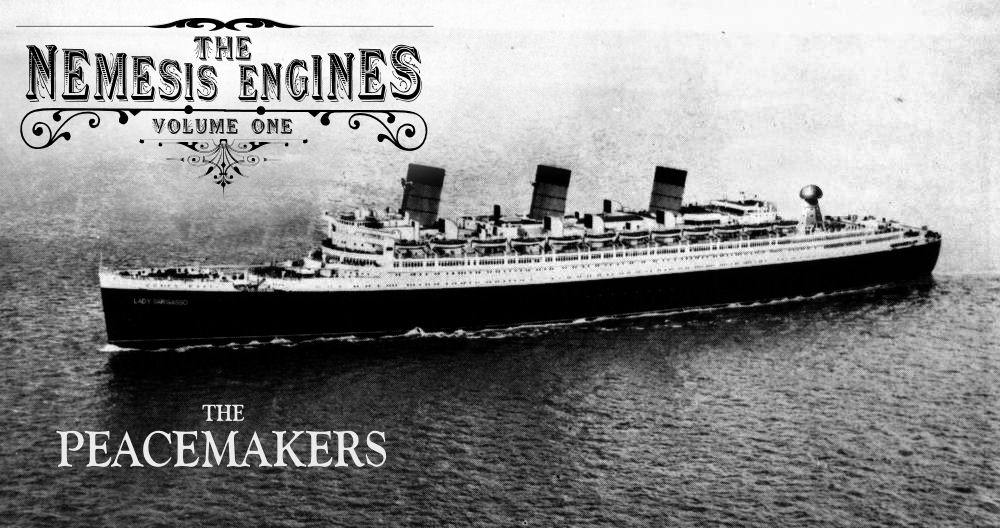 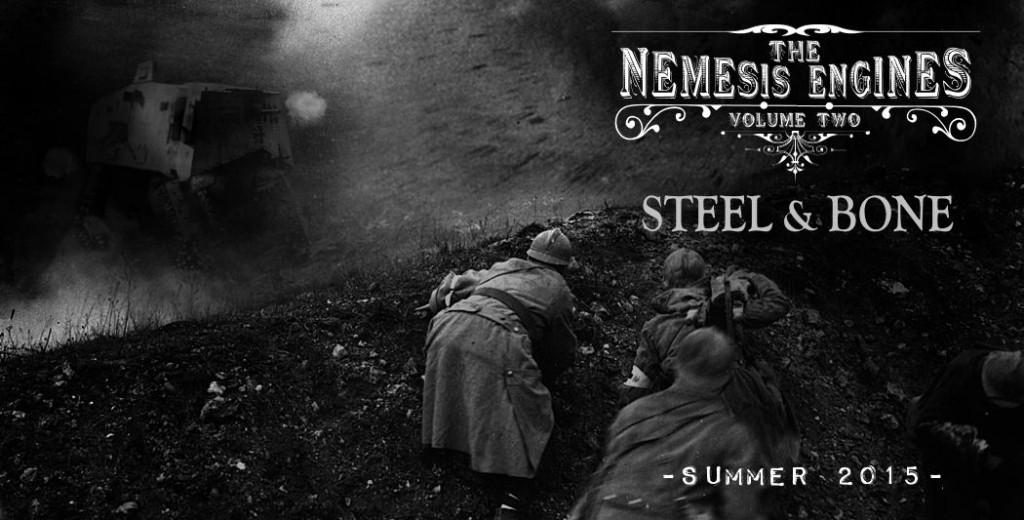 If you’re all new to this, here’s the story: The Peacemakers is out already and available on Amazon. The follow-up is Steel & Bone, and it is slated to come out late spring/early summer. Vol.3 of The Nemesis Engines will come out sometime in the spring of 2016 to wrap things up. It’s okay to think of the books as seasons for a show: Season 1 is available now, Season 2 comes out in a few months, and Season 3 comes out next year.

What’s it about? All I can tell you is that if Jules Verne, F. Scott Fitzgerald and H.G. Wells had somehow managed to write a story about WW1, it would be The Nemesis Engines.

On the ‘Kindle Exclusive’ thing:

Is there a plan to release The Nemesis Engines on actual paper? Yes. There is.

For right now though, The Peacemakers (and presumably Steel & Bone) will be Amazon Kindle exclusives. (You don’t need to own a Kindle to read it, by the way. You can just download the app for free and use it on any smartphone or tablet.) Two reasons for that: 1) No need to kill trees to read books anymore. Know what I mean? Save some trees: read at least one book per year on a tablet. 2) Would you rather pay $19 for a book or $7? I’m thinking $7.

At any rate, paper versions are coming. (Too many of you have been asking for them for me to keep holding off forever.) There’s even talk of an audio version in the works… maybe released as a podcast… we’ll see. Let me know what you think about that in the comments or on Twitter or Facebook or wherever. I do listen. Your feedback matters a lot.

For now though, you can order The Nemesis Engines, Vol.1: The Peacemakers on Amazon. Just click here. I’ll let you know when Steel & Bone becomes available for pre-order.

All right. That’s it for now. Have a great weekend, and happy reading!

Oh, and don’t forget to write a review on Amazon (especially if you liked it).

The CMO and the cloud – Part 5

The CMO and the Cloud, Part 7: the #CloudTalk interview