Olivier Blanchard » Inside Left Pocket » On The Charlie Hebdo Massacre.

On The Charlie Hebdo Massacre.

January 7, 2015 by Olivier Blanchard - No Comments

I’m at a loss for words, honestly. This is just psychotic and indefensible.

Masked gunmen stormed the Paris offices of a weekly newspaper that caricatured the Prophet Muhammad, methodically killing 12 people Wednesday, including the editor, before escaping in a car. It was France’s deadliest postwar terrorist attack. Shouting “Allahu akbar!” as they fired, the men also spoke flawless, unaccented French in the military-style noon-time attack on the weekly newspaper Charlie Hebdo, located near Paris’ Bastille monument. Eight journalists, a guest and two police officers were killed, said Paris prosecutor Francois Molins, giving a partial breakdown of the 12 dead. Among those killed were Bernard Maris, an economist who a contributor to the newspaper and was heard regularly on French radio, and cartoonists Georges Wolinski and Berbard Verlhac, better known as Tignous. – NYT

And for what? Because some brainwashed assholes were offended by silly political cartoons? What century is this again?

Paris Shooting at Charlie Hebdo: How the terrorist attacks unfolded. – The Telegraph

12 dead in attack on Paris newspaper. – The New York Times

Live updates from The Telegraph here. 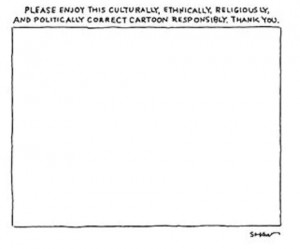 My heart goes out to the families and friends of the victims of this senseless act of mass murder, including the heroic police officers who lost their lives trying to protect innocent people.