Doing Business In The Age of Experience – Part 3

In Part 1 of our Age of Experience series, we talked about the evolution from product design to experience design. In Part 2, we looked at some specific applications of this shift: how innovative companies are looking past product design as the end game, and instead leveraging product design as a platform for user experiences. Today, I want to close things out by talking about what lies ahead (just over the horizon). We’ll keep circling back to this every few months, but let’s take a quick inventory of some of what I see already.

What’s next for the Internet of Things?

I’ve never liked the term “Internet of Things.” It’s awkward. It’s clunky. It’s also short-sighted. On the semantic side, a more elegant way of describing this technological phase in our collective evolution might be “connected devices” for the product category, or “connected device integration” for the actual phenomenon. Anyway, Internet of Things it is, so let’s go with that. IoT. One of the things I heard over and over again at the 3DExperience Forum was a variation on the theme that moved away from “things” or objects, and focused instead on experiences. Everyone there had already moved on from the Internet of Things to the Internet of Experiences. This isn’t just a semantic hat trick. The relevance to our conversation is that the shift from things to experiences telegraphs the evolution of an evolving mindset. It may seem trivial, but it signals a pretty huge shift, considering the size of the market for connected devices and the extent to which smart, connected tech will be increasingly woven into every aspect of our lives in the future.

Don’t worry, I am not going to turn into a futurist. That isn’t what I do. But being plugged into the heart of tech industry and specifically into hubs of innovation like Dassault Systemes, I get to see a) tech capabilities that don’t really get a lot of attention on Facebook and Twitter (especially compared to app-style startups), b) how all the tech/culture/market pieces fit, and c) how the product, trend and infrastructure trajectories behave. The combination of my background and the kind of access I enjoy sometimes puts me in a unique position to help connect the dots not just for myself and clients, but for you guys as well, which is why we are talking about this right now.

Anyway, the point is that the Internet of Things is just a means to an end. What makes the IoT powerful and valuable is that it helps us customize our environments, which is something that humans are deeply receptive to. From the moment our ancestors started decorating caves, we have been experimenting with new ways of controlling our environment, which is to say how we shape and experience the world around us. Everything we do ultimately results in an experience: The little bits and pieces of world that we build for ourselves – at home, at work, in transit, while we shop, while we play, while we rest, while we travel, while we eat and drink – are designed to create and evoke experiences. Cuisine is a platform for experiences. So is music. So are literature and theater and sport. Couches, perfume, device ergonomics and connected devices play directly into this. The IoT is simply the most recent phase in a journey that started a very long time ago.

So the question then, is what’s next? What are the next series of dots we’ll be connecting in the next few decades?

The 10,000ft view is pretty simple: 1) smart, connected devices will continue to their embedding in the very fabric of our daily lives, and 2) this increased degree of tech integration means that the way industries think about innovation will evolve accordingly.

On a more concrete level, this means that “wearables” will increasingly become more integrated into everyday objects. A few examples: We are already seeing smart apparel (from athletic clothing to performance footwear) turn up for athletes, emergency first responders and the military. Right now, the tech is limited to basic monitoring and measurement (like heart rate and body temperature), but we will soon start to see diagnostic capabilities  like blood pressure, stress and blood glucose added to the mix. Bluetooth-connected apparel and smart fabrics will definitely find mainstream adoption once the category starts to mature. 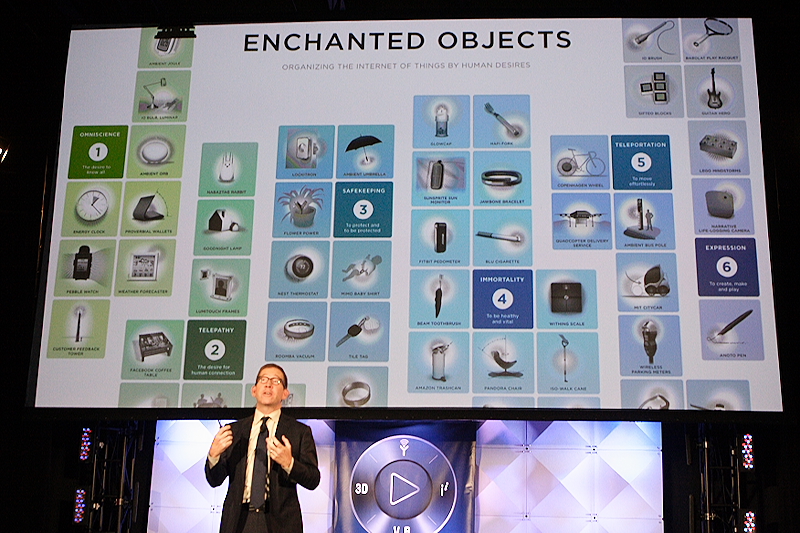 It also means that everyday objects will a) become smarter, and b) play a part in creating entirely new types of experiences for us. For a deeper dive into what I am talking about, I recommend reading David Rose’s Enchanted Objects. David gave an incredible keynote at the Boston 3DExperience Forum, in which he talked about the inevitability of social robots (for better and for worse), the many categories of smart, enchanted objects, and how the technology that now makes such things possible isn’t going away anytime soon. We could have a fascinating conversation, for example, about fairy tale “enchanted objects” (like the talking mirror in Snow White) now being within our grasp. We have reached a point in our technological evolution that makes “magical” objects possible, at least in the sense that a child, or a time traveler from the Middle Ages, would be incapable of grasping the difference between magic and technology. I mean… talking invisible virtual assistants that follow you from room to room? Being able to turn any surface into a touchscreen? A house that reads your moods and anticipates your needs? Appliances that plan your meals for you?

On the more complex end of the spectrum, here is a retail mirror that allows you to see what a garment (or a complete outfit) would look like on you: 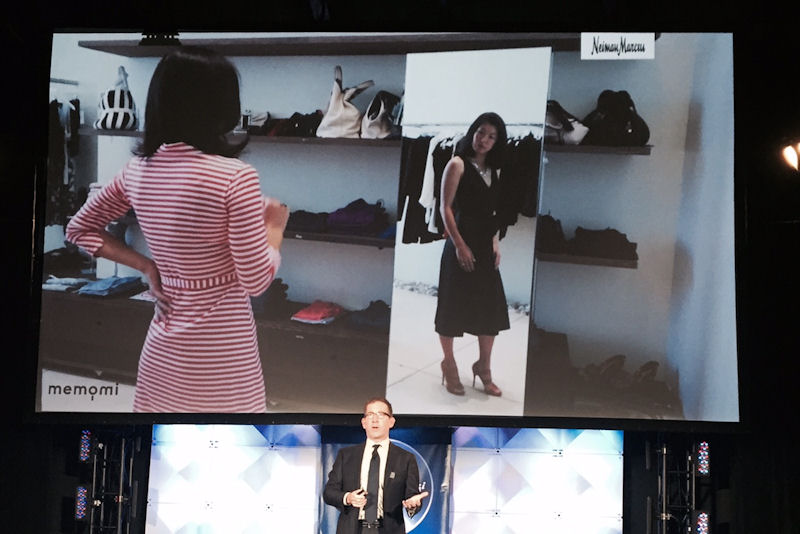 On the simpler and more utilitarian end of the spectrum, here is an Rx container that reminds you to take your pills: 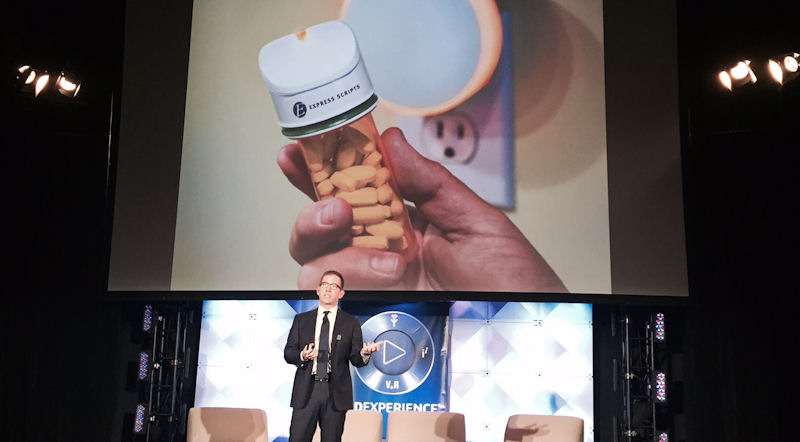 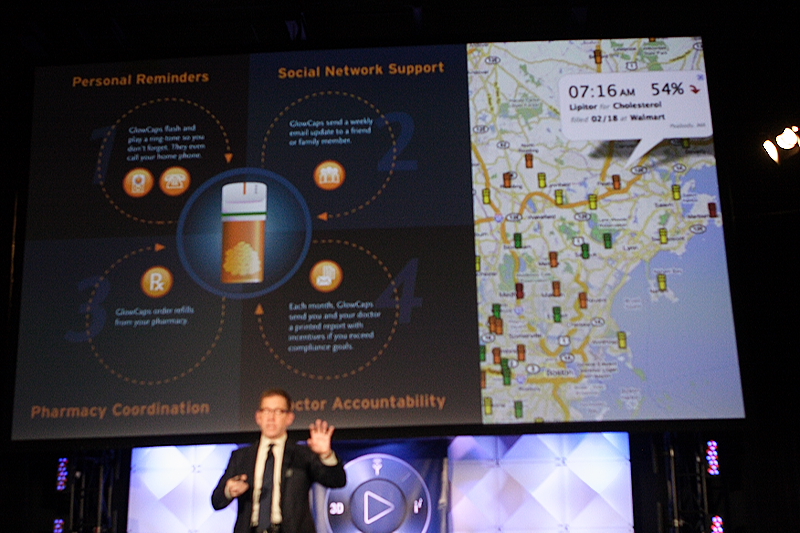 As simple as it is, note its power: Below are graphs showing the difference between people using a normal pill box vs. a smart pill box. The pink dots are instances in which someone forgot (or chose not) to take their medicine. The first image is the control group (just using standard Rx containers). The second image shows the impact of using the smart container. 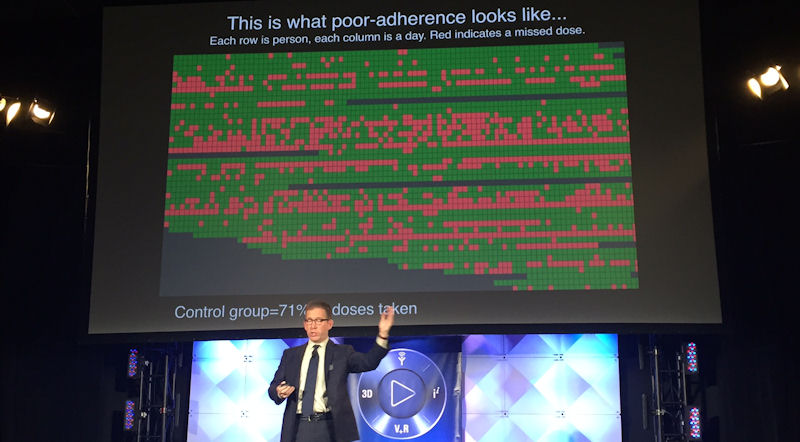 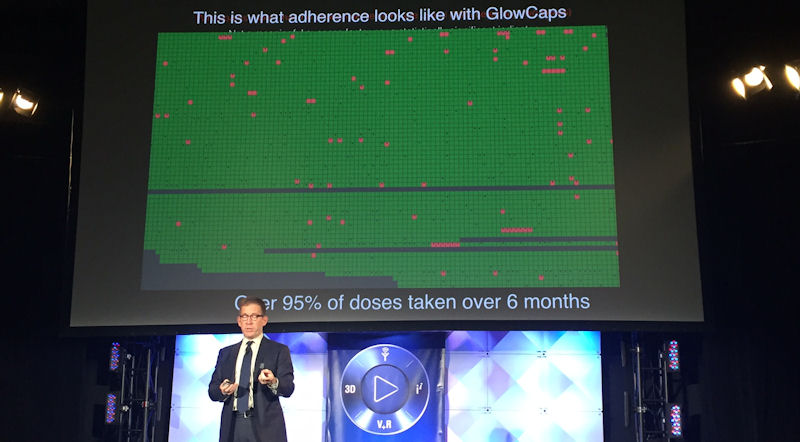 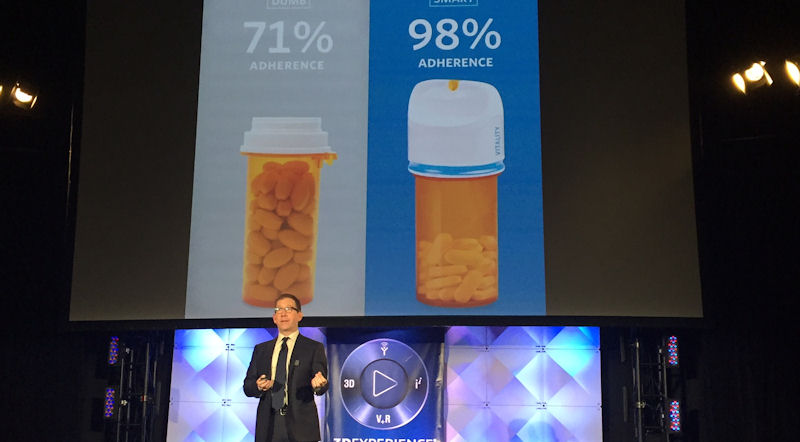 Cool but cost-prohibitive, right? Not anymore. 1) The overall cost to society of millions of people not taking their meds properly is significantly greater than the cost of the device. 2) The sensors and tech that go into a pill box to make it smart now only costs about $1-$5 per unit. That’s all.

Also, will social robots become our children’s babysitters and companions? Will they (and smart homes) help solve loneliness in the elderly and help them live fuller lives? Perhaps. 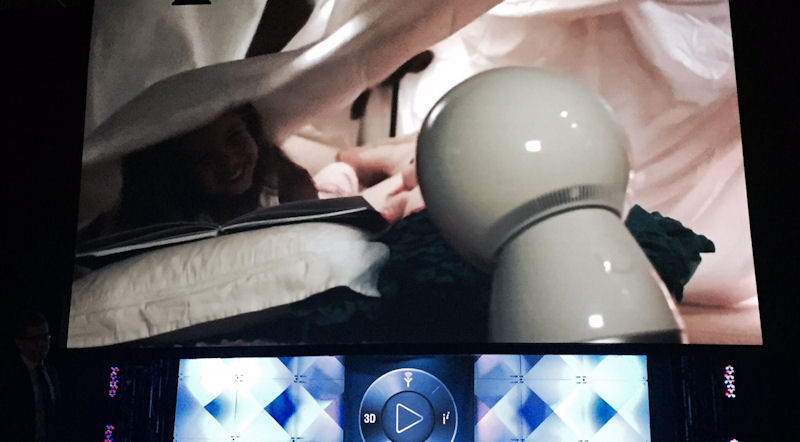 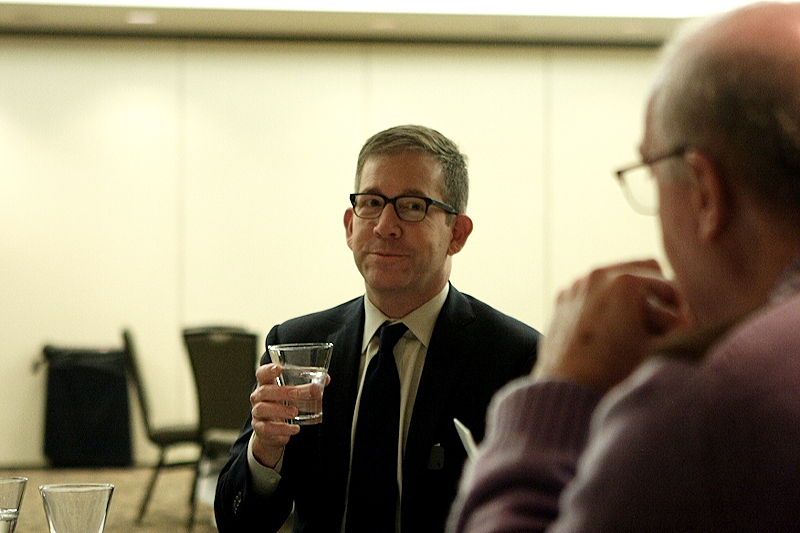 I had an opportunity to sit down with David in a little roundtable event to talk about this. We talked about applications in agriculture (microbiome sensing, for instance), affecting computing (relating to our emotional states), medical environments (replacing stress and uncertainty with soothing, pleasant experiences, particularly when dealing with very young patients), intelligent homes (imagine Siri-like A.I. embedded into every room and appliance in your home), and transportation (from talking, self-driving cars to adaptive environments in trains and airplanes). We’re already seeing the first iterations of this technological integration. A decade ago, Microsoft’s House of the Future in Redmond, WA already presaged this (albeit with RFID technology driving it all), but we are seeing it actually taking shape all around us now, thanks to apps, broadband data networks, bluetooth connectivity, sensor technology, and the advent of both cloud services and A.I. If the confluence of these technologies forms the foundation of the new world we are building for ourselves, our need to improve our environments and experiences is the driving force behind it.

What about self-driving cars and objects as a service?

I also had a chance to sit down with Dassault Systemes’ VP of Transportation and Mobility Industry, Olivier Sappin. We talked at length about the inevitability of self-driving cars, how self-driving cars will impact urban design and planning (See the video I posted in Part 2 for more insight into urban planning innovation), and the impact that millennials are already having on sharing vs. owning cars, both in regards to (again) urban planning, and how car makers will navigate the market shift from ownership to… hybrid models of ownership, co-ownership, rental, ride-sharing, etc. (The future of ownership question was a very big topic of conversation, which was later augmented by Jeremiah Owyang’s fantastic keynote on Crowd as a business model.) A few insights I can share with you without getting any more long-winded than I already am:

As luck would have it, Dassault Systemes can help with every single point of engineering, design and innovation he and I discussed, and yes, Olivier smirked again when the discussion naturally circled back to that. The cars, the roads, the cities, the driver experiences, the pedestrian safety, the power grids… it all falls perfectly into their wheelhouse.

By the way, I haven’t forgotten my own semi-accidental use of “objects as a service” (OAAS) in this section’s title. Not a lot of Google activity on that, so I’ll just coin it here. If it ever gets any kind of traction (like Software as a service/SAAS), make your checks payable to you-know-who.

Speaking of the OAAS model, I need to devote at least one whole post to Jeremiah’s presentation.  Until I do, here are a couple of photos from his keynote (First and last slides): 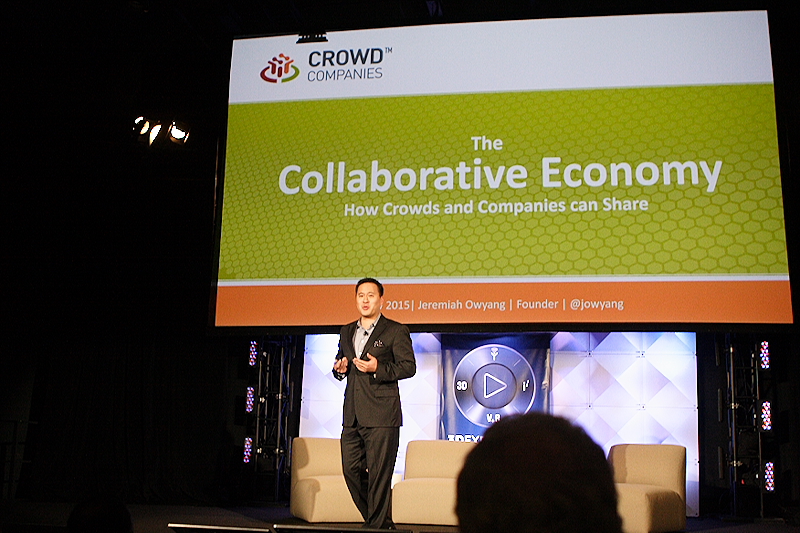 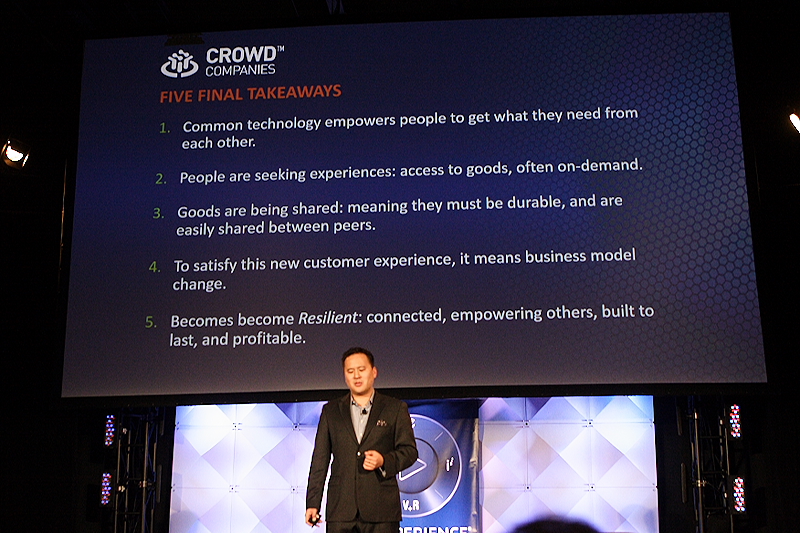 I don’t want this to turn into a massive white paper, so let’s do a quick recap of the meatiest points covered and not covered in this three-part series:

One of the things I walked away with after this year’s 3DExperience Forum is that approaching any innovation ecosystem from an experience design angle guarantees both purpose and value in every kind of design project. It essentially helps answer the most important question every product manager, designer and inventor should start and end with: Why? 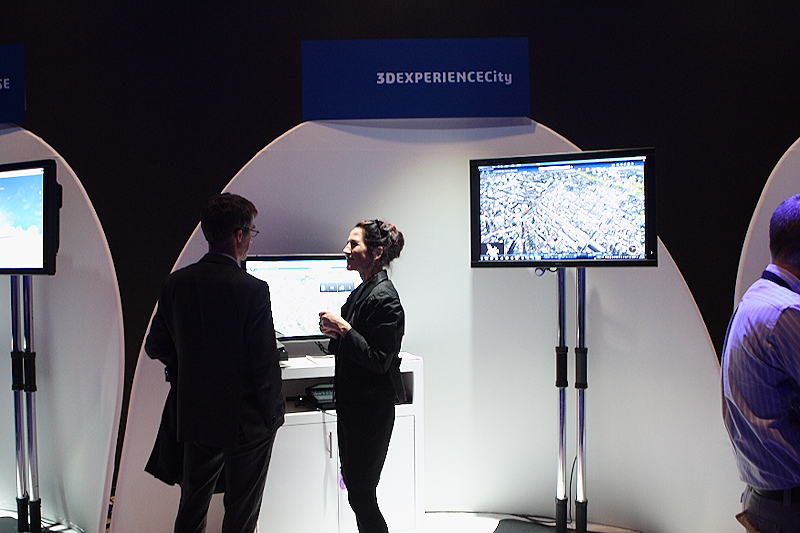 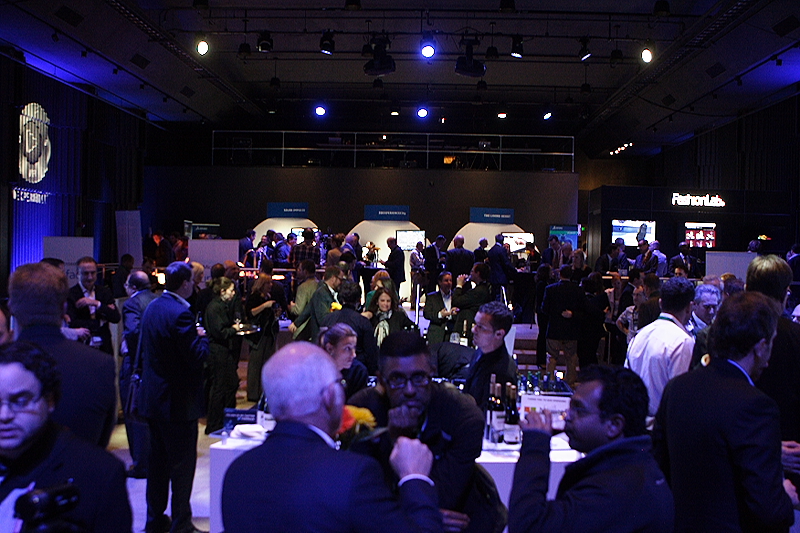 On a more personal note, beyond the excitement I get as both a tech geek and a business strategy nerd, what events like this do for me is kind of fill me with hope. I know it sounds corny, but it’s easy to get bogged down by the news sometimes – war, racism, pettiness, ugly politics… Then you get to peek behind the curtain at the amazing things people are building, at the mind-boggling real-world technical capabilities that are available today (stuff that would seem like science fiction to the average person), to the passion and genius that drive it all, and you get the sense that the world is moving in the right direction after all. We are going to Mars. We are going to cure cancer, and ween ourselves off fossil fuels, and clean up the oceans, and live in homes and cities that will make the future of the Jetsons seem dull: Social robots, intelligent objects, self-driving cars, self-healing energy grids, lifestyle-integrated medicine, talking homes, replacement organs, environmentally-friendly cities… it’s all just over the horizon. We’re already seeing the start of it, and that’s exciting, not only because it’s “cool,” but because of what it means for us as a species, because of the caliber of people working together on building a better world, and because no matter what, there is always an army of people out there working on building a better world for everyone. Too bad we don’t get to see much of that on the news but if, from time to time,  I can shine a tiny bit of light on that world here, I’ve done my part. (And guess what: if you want to be part of that world, you can be. Good, smart, passionate people are always welcome.)

Anyway, that’s it for me today. I hope this short series was helpful and informative. Here is where you can find out more about Dassault Systemes and what they do.

IBM Just Made Cognitive Computing And Advanced Analytics Accessible To Everyone.