Did IBM Just Build The Marketing Management Solution We Have All Been Dreaming About?
Product Review: Strava Cycling’s Premium Kit by Cuore

I’ve lived in the South a very long time. More than half my life now. I started coming to the South as a kid, during the summer, then I went to college in the South, then I moved here, got married here, raised children here. My entire adult life has been spent in the South, being as much a part of it as anyone else who calls the South their home. So I can say without any doubt or reservation that the whole thing about “Southern Culture” and “heritage” being tied to the battle flag of Virginia, the “Stars and Bars,” the “Southern Cross,” or what most people refer to as the “Confederate flag,” is bullshit. It isn’t that southern culture doesn’t exist. It does. There’s a rich culinary culture to celebrate here, a literary culture, a religious culture, a culture of hospitality, even. There’s a lot to celebrate. But not this.

If you really want to promote southern culture, look no further than states’ flags. Here’s why: that culture changes from town to town, from county to county, from state to state. “Southern culture” in Dallas isn’t the same thing as “Southern culture” in New Orleans. If you want to paint Southern culture with that broad of a stroke, you might as well just call it “American culture.” Because, you know what? You know when you’re in Georgia. You know when you’re in Alabama. You know when you’re in Tennessee. We aren’t talking about a giant Confederate region with its own money and language and homogeneous culture. That notion is nonsense. It’s a fabrication. It doesn’t exist. And so you can completely express your affection for “Southern culture” (whether you were born into it or adopted it later in life) by proudly flying your state’s flag, or your favorite university’s colors, or wearing a T-shirt from your favorite city. That’s what they’re for. Be proud of your state. Be proud of your family’s heritage, were it be Scots-Irish or German or French, or Indian or Vietnamese or Ukrainian or Senegalese. And it’s perfectly okay to be super proud of being from Travelers Rest, SC or Lexington, KY or wherever. Be proud. You probably have a lot to be proud about. Just make sure you’re proud of the right things.

Because that flag there, the flag of treason, the flag of the rebellion that killed nearly as many Americans as every other war the US has ever fought (yes, combined), the most potent anti-American symbol in history that STILL, to this day, boasts and warns that it will “rise again,” (like what… Hydra?), the flag so conspicuously adopted by almost every white supremacy group in North America (and many more overseas), the flag that sits, as a patch, next to the Nazi Swastika over the hearts of skinheads and KKK gunmen waiting for their chance to tear down the US, that flag doesn’t represent the “heritage” you keep saying it does. EVERYONE knows what that flag really represents. Go to any country anywhere around the world, and they’ll tell you. Even they know. You aren’t fooling anyone with the rhetoric and the “southern pride” line. 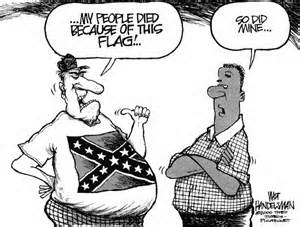 Here’s the thing: That isn’t the flag of low county boils and crawfish étouffée, it isn’t the flag of mint juleps and peach cobbler, and it sure as shit isn’t the flag of southern hospitality. You KNOW the history behind the ideology it has come to symbolize. You KNOW why it flies wherever it flies. You KNOW why it’s there, and you also know why you want it there. And if you live in the South, you know it better than anyone because it’s right there on the airwaves every single day. It’s at the office too. It’s in the church parking lot. It’s at the tailgate before the game. You can’t not know what it is, because you can’t go a day without someone reminding you with a word, with a Facebook comment, with a “joke,” with a wink.

So, FYI: Every time you defend that flag and pretend it isn’t what we all know it is, what YOU know it is, all you’re doing is letting the world know what you are. I thought you should know, in case, you know… you want to maybe turn the page and become a better human being at some point. (No time like the present.) 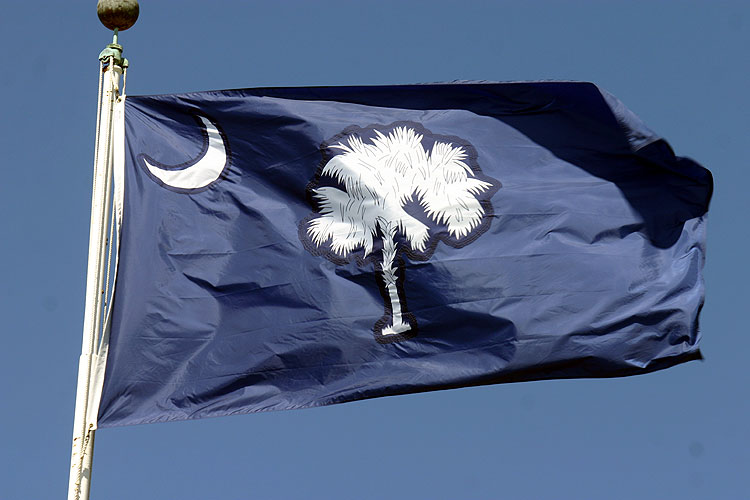 This (above) is the legitimate flag of South Carolina and its culture, by the way. It’s really pretty and it’s unique. It doesn’t need to be supplanted by another flag that celebrates division, strife and hatred. I actually like this flag. (A lot.) It is the flag of “Southern Culture,” South Carolina style, home to some of the best food, the best hiking, the best beaches, the best bike rides and the best people in the world. And when that is the flag that represents the state, rather than the other one, you get to see a lot more of what’s truly outstanding about this part of the country. No drama, no controversy, no dubious allegiances, no division.

And don’t get me wrong: there’s nothing wrong with being proud of your great grandpa’s heroism and sacrifice during the Civil War. Regardless of everything else, what the flag represents doesn’t have to be a stain on your family’s history. A lot of Southerners fought to defend their homes, not necessarily to push a political or a racist agenda. Which is precisely why that flag belongs in history museums. For better or for worse, it has its place in history. But as a symbol of “culture” or “heritage” in 2015? Nope. Germans dealt with a similar situation with the Nazi flag. They made the tough choice, the right choice, to accept their mistake and move forward. If they can do it, why can’t some of us do the same?

Tip: it isn’t all that difficult to honor your family’s military history AND simultaneously reject the toxic ideology that sent them to war. You can be proud of your ancestors’ military service and bravery in battle without having to also embrace the questionable causes of their era. It isn’t that difficult, really. All it takes is the will to do it, the will to accept that having been on the wrong side of an issue doesn’t erase personal bravery, the will to accept that just because something is branded as “your heritage” doesn’t mean it’s the sort of heritage that should be protected and defended, let alone celebrated. It’s time to come to terms with what that symbol means and what it has always meant, to come to terms with reality rather than mythology, and realize that Southern identity, true Southern identity, doesn’t need to shackle itself to racism or anti-government rebellion in order to be legitimate. Quite the contrary. This racist rebel crap has been a cancer on southern identity long enough. Time to move on.

If you want to fly a flag of hatred and treason in your front yard, you have that right. The First Amendment of the US Constitution guarantees that you do. And if you want to wear it on a T-shirt, on a belt buckle, as a tattoo, same thing: go for it if that floats your boat. Just be ready to feel increasingly marginalized by society though. The irrational compulsion to cling to artifacts of white supremacy, treason and violence, especially in the wake of the Charleston attack, isn’t exactly endearing. Even as a white man, every time I drive or ride by a house that flies that flag, I know it isn’t a place where I will ever feel safe or welcome. It’s the flag of danger, of lynchings, of murder and cruelty. That’s what it telegraphs to most people, and don’t pretend that you don’t know it. If that’s the message you want to send, the identity you want to wrap yourself in, that’s your choice, but don’t be surprised when you end up feeling more isolated and rejected than ever.

And don’t look to your states for support anymore. Because of Dylann Roof’s horrific attack in Charleston, and his photos and manifesto, government entities around the US have decided that they cannot and will not continue to promote symbols of oppression, division and hatred. They never should have in the first place. Even massive companies like eBay, Amazon and Walmart can’t distance themselves from those symbols fast enough. That isn’t a liberal plot or an attack on your rights, by the way. It’s choice. It’s conscience. It’s empathy. It’s the very slow wheel of progress finally catching up to one of our most shameful and inexplicable cultural blind spots.

So if you want to hold on to a false “heritage” narrative, go ahead, but understand that the jig is up. No one outside of the neoconfederate bubble buys into the “heritage, not hate” slogan anymore, the “it ain’t racist” façade, the “it’s really just about freedom and bravery” story. You blew it. That flag is toxic and pretty much always has been. (Except perhaps within the childlike, innocent universe of the Dukes of Hazard.) If you really want to celebrate and promote your Southern heritage, there are legitimate ways of expressing that pride. Be proud of your state flag, for starters. (Be proud of your country’s flag, for that matter. Hell, be proud of your country, period, instead of fantasizing about seceding from it or destroying it outright.) There is so much to be proud of. Seriously. The South is a cornucopia of awesomesauce once you get past all the anger and hatred towards outsiders and yankees and black people (the list goes on and on and on) that should have died generations ago. It’s 2015, guys. Let the horror and stupidity of the Civil War go. Let the Confederacy’s defeat go too. That grudge is played out, especially since your ancestors did it to themselves. (Why are you still clinging to it? It was their mistake, not yours.) Seriously. Join the rest of us in the 21st Century. It’s time. You think that flag is your anchor, but it’s nothing but a ball and chain. Unshackle yourself. You’ll feel better once you’ve let the weight of all that painful and shameful history go, I promise. You’ll look back on this twenty years from now and wonder why you waited so long to free yourself from the power that symbol had over you.

And you know, when you finally put away the old symbols of white supremacy, treason and terror that hijacked your real Southern heritage since long before you were born, what you’ll find is that the real thing was always there, just under the surface, begging to emerge. Real Southern culture that deserves to be shared and celebrated by everyone, rich with kindness and hospitality, amazing food and music, enduring literature and art, even a long tradition of innovation and genius that continues to make the world a better place.

In closing, think of it this way: peach cobblers and jazz don’t drive people to want to start a race war. Grits and zydeco don’t inspire people to support apartheid and segregation. Cornbread and the blues don’t foster hate. Embrace your real heritage, the one that actually deserves to be embraced.

Until the new book comes out, if you want to help improve business through your digital programs, pick up a copy of Social Media ROI – Managing and Measuring Social Media Efforts in your Organization: The #1 Social Business desk reference for executives and digital managers.

And if fiction is more your speed, check out The Nemesis Engines, Vol.1: The Peacemakers. Think Jules Verne meets H.G. Wells, with a World War I twist.

White Hoods, Faux-News, And The Insanity Of Rage

How To Sidestep A Statewide Boycott: 5 Tips For Indiana Businesses